Recently purchased a Laser with a AEIO-360. The aircraft is current seeing 210 in cruise and getting to 240s quickly in 15 mins of aerobatics. I am running Phillips 20W-50 and have tried Phillips 20W-60 with worse results.

It was suggested to me to run dual oil coolers. One in the front and the current one is the rear and this issue would be resolved. I am fortunate enough to have an extra oil cooler ready to go. I am wondering if anyone else has done this and where have you installed, hose routing, mounting, etc.
Top

What is the current cooler setup? I'd start by taking a look at how well the current installation is working the airflow. There are plenty of aircraft out there that fail to maximise the cooling capacity of the cooler.

Plenty of Pitts/lasers out there with that engine running just one cooler.
Top 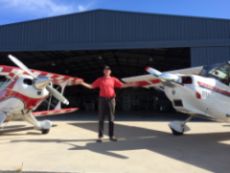 The first three Lasers built in Australia all had the oil cooler behind the seat for cg reasons from the first one.

We had a ram air scoop on the LH side just under the wing near the trailing edge and the outlet under the fuselage with a dam ahead of the hole - worked well in fairly hot ambient temperatures.

Later Laser shortened the front fuselage 4" to move the engine aft. It has the oil cooler behind the engine baffles top left side from memory.
Regards,
DJP
Top

As with everything under the cowl that needs cooling, it's the air coming in as well as going out.

My setup similar to an S-1T starts diverting the air down before the cooler so the air exiting flows better to the cowl exit. A smooth transition for the cowl air to exit the cowl will also help in cooling. My radius is tighter than optimum. The prop can also make a significant difference. Switching to the WhirlWind 200AC blades from the 200C blades lower the temps, especially the CHT's.